There are several cheat commands that can be used in the game.

Before any other cheat command can be used, cheating mode must be enabled. This is done by typing /cheat in console in singleplayer, or !cheats in multiplayer (the latter requires admin or room boss status).

Entering the command adds a new button on the global commands bar at the top of the screen that brings up a handy cheat menu: 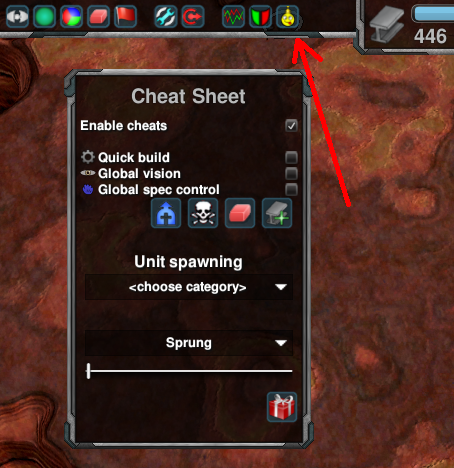 This menu allows to perform most common cheat actions. In addition, you can type commands manually for greater control, see the list below. Entering the command again, or unchecking the appropriate option in the menu, disables cheat mode, but any cheats already enabled (for example fast build) stay.

Gives 1,000 metal and energy to the entering player's team.

Spawns a given number of units at the location of the mouse cursor (or given coordinates). Can also be used to spawn features, e.g. wreckage.

Unit names are the machine-facing identifiers rather than the human names, e.g. cloakraid for the Glaive. Unit names can be found on GitHub or in the source of the unit's page on the wiki. Wrecks and debris of a unit typically have the same name, but with the _dead or _heap suffix, respectively.

If no team is specified, will give to the player's current team, or the team currently being spectated.

Spawns one of each multiplayer unit and building (sorted by factory) in the top-left corner.

Enables/disables full map view for that team (no team specified means it applies to everyone).

When enabled, any player (including spectators) can give commands to units on any team.

Enables/disables building everything for free and near-instantly.

Switches control to the selected playerteam (multiple playerteams make up an allyteam, of which there are usually two in a game).